WHERE ARE THE PROCEEDS OF CRIME ? 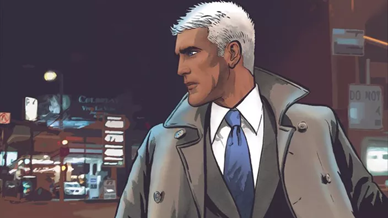 Some days ago, I fell on some Belgian comics I used to read as a youngster called “IRS”. The main character is Larry Max, a sort of James Bond super Compliance Officer. By linking finance, flow of funds to organized crime rings, he tracks bad guys throughout the World.

What strikes when reading these comics is the accuracy of the information, although they started back in 1993. In “Mia-Maï”, a bad-guy billionaire media tycoon is interviewed by a reporter and claims the following : “Do you honestly believe that Bill Gates is the richest man in the World ?” (Don’t forget we are back in the early 2000 and “Amazon”, (and its current CEO, Jeff Bezos aka richest man in the World), was for many something in Latin America?) The tycoon continues: “Where do you think the billions from corruption, drug cartels and other related crimes disappear to? There are “many” people way far richer than him!”

2 years ago I attended a conference given by Refinitiv, lots of you know better as the World-Check provider, they substantiated that on a yearly basis, all efforts combined 1st line of defence (financial industry front officers for example), 2nd line of defence (understand Compliance & Risk officers) & the Worldwide criminal prosecuting authorities freeze only 1% of proceeds of crime averaging 1000 billion per year. Frightening. So yes, it’s a fair question to ask. How can all this wealth somehow disappear from radars?

Since the time quite some effort has been implemented to better track and freeze those assets. Thinking of FAT-F recommendations (nr 22 in particular) and OECDs’ Exchange of information and common reporting standards. We can also think of FATCA’s Exchange

of information in relation to Americans. A costly mechanism, the IRS managed to impose on financial intermediaries of any country dependant of the US, otherwise said the 2/3 of the Planet. Also, there are lots of other similar unilateral / multilateral initiatives between Nations in that direction. But still today, significant illicit proceeds keep on disappearing.

Although, I do not hold the complete answer, let us operate a FLASHBACK:

Throughout the flamboyant 80ties & 90ties, many businesspeople made lots of money out of those years and were seeking solutions for tax avoidance, asset protection against liability claims and so on. And there came Corporate service providers, solicitors and specialised accountants with solutions which would turn out to be years later the Highway to Hell for many of their customers. (Great Track by the way: AC/DC, 1979).

Did you know that in those days, Corporate Services providers based in the US were not regulated and therefore not obliged to proceed with any identification of beneficial owners? They could sell Delaware, Nevada, Wyoming companies like bread&butter for less than 300 USD and even get bank accounts open for those companies.

Less than 10 years ago, in the over-developed Canada, a Big4 firm came up with what would be at the time, a great solution for this wealthy population using offshore structuring towards Isle of Man and the legal trick of the offshore gifts. Not only were they not convicted when it was discovered, thanks to legal pressures they put on justice and sponsored events, they coldly evaluated the risks encountered, concluding that sanctions in Canada in comparison to the business model of this scheme were ridiculously low. So why lose time and reputation collaborating with courts? (Source: https://www.youtube.com/watch?v=6LjMXmGdhrA )

Since then the industry has learnt from passed mistakes and applies a higher ethical standard. Now, if you could get away with that in Canada less than 10 years ago. What to expect today from offshore tax-free heavens, dictatorships & other developing Countries? So many more years of hard-work, diplomacy and enforcement are necessary to be up to speed with requirements. At least until that sweet spot, the assistance from independent Compliance professionals is a must have more than just a nice to have.

Conclusion: This is only one example out of thousands. If the will for a change is not enforced globally from the Top Officials of all Countries combined nothing can change. Legitimate and unfortunately illicit proceeds will continue to mix and disappear.

Thank you for reading & sharing we only grow from word to mouth!